02
Jan
Back one page

In the 493 days I’ve spent camping and hiking in the Mexican wolf recovery area in eastern Arizona and western New Mexico, I’ve seen 56 of the animals in the wild. I try to learn as much as I can about their stories. One lobo stands out not only as a super wolf, but a super dad.

Mexican wolf M1038 came into the world in a den in the wild in New Mexico in 2006. Like all lobos, he was born blind, deaf, and completely dependent first on his mother’s milk, and later, on the hunting skills of his parents and the other members of his family, or pack. During his first two years he remained with his pack, learning how to be a wolf.

In early 2008 he left his birth family, found a female wolf, and settled down in new territory, forming the Fox Mountain Pack. On June 23, 2008, the Mexican wolf field team observed three pups with the pack. Sadly, the following day the adult female wolf was found dead of a gunshot wound. The three little pups, only a few weeks old, were left without a mother.

Unlike some mammals, male wolves play a strong role in raising their young, but hunting and caring for three pups posed a huge challenge to M1038. The field team pitched in and gave him a hand by caching food for the little family. A remote camera placed near the food cache showed that M1038 himself had an injured rear leg. In spite of his injury, this super wolf succeeded in raising all three pups until the end of the year. Two of those pups later became leaders of their own packs in the wild. 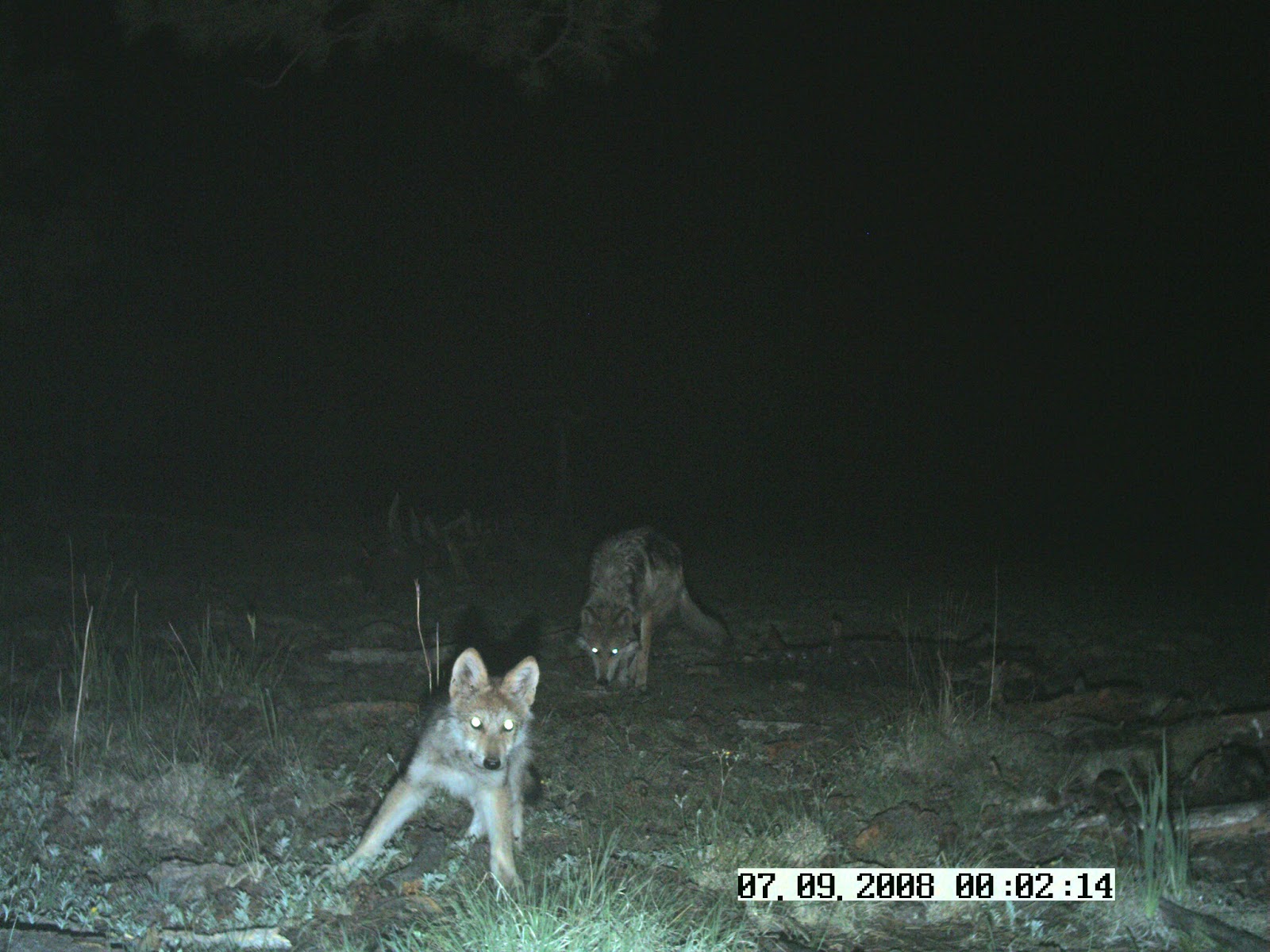 Fox Mountain M1038 (rear) with one of the three pups he reared by himself in 2008. Remote camera photo courtesy of Mexican wolf interagency field team.

In September 2011 the field team observed two adult wolves and a younger wolf with the three pups of the Hawk’s Nest Pack. During June 2011 the Wallow Fire—the largest wildfire in Arizona history—had burned directly over the area of the Hawk’s Nest den. Then in August, Hawk’s Nest breeding female, F1110, was killed by a lightning strike during the monsoon season. Despite of the effects of the fire and the loss of their mother, the field team observed pups in the fall.

One of the adults observed with the pups in September had a “non-functioning rear leg and white radio collar,” according to the wolf project monthly update. It was M1038! Again, he had been left with young pups to rear, but this time he had the help of F1208, a daughter of F1110 by her previous mate. 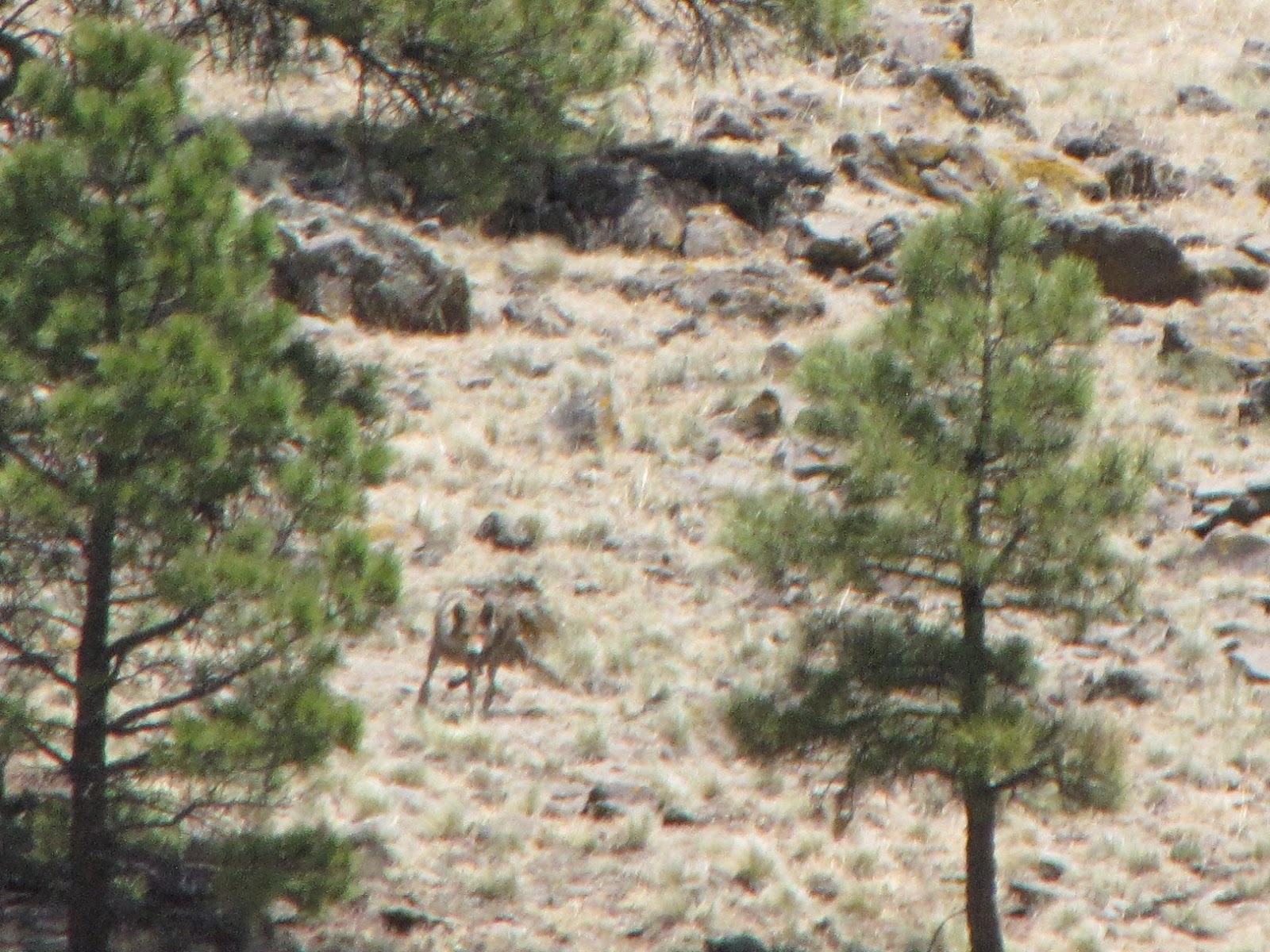 In February 2016 yet another mate of M1038, F1280, fell to an illegal gunshot. For a while, M1038 remained with a male yearling and two of the previous year’s pups, but by the end of the year, he had begun wandering alone. He continued his solo travels throughout 2017, primarily in the territory of the Diamond Pack in the northern part of the Apache-Sitgreaves National Forest in Arizona.

As 2018 began, M1038 was found in the Gila National Forest in New Mexico, traveling with a female from the Elk Horn Pack, F1473. By April, the pair had settled down and appeared to be tending a den. The Hawks Nest Pack was reborn! Sadly, the den apparently failed. The two adults separated for a while, but by October, M1038 and F1473 were again traveling together. Well-wishers hoped they would remain together and den again in 2019. It was not to be.

The monthly project update for November 2018 tells the story in a few chilling words: “In November, M1038 was located dead in New Mexico. The incident is under investigation.”

We won’t know the circumstances of his death until the Mexican Wolf Reintroduction Project releases more information, but I imagine that F1473 feels his loss, whether or not she was nearby when he died. Rest in peace, M1038. You were indeed a super wolf.