25
Jan
Back one page 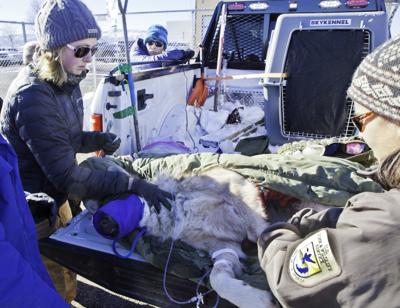 Genevieve Fuller, a wolf specialist from the Arizona Department of Game and Fish holds onto a sedated Mexican gray wolf that received a veterinary checkup at the Springerville Airport during the 2017 wolf count.

Bob Martinson/Special to the Independent

PINETOP — How many Mexican gray wolves are out there? That’s the question that the annual winter wolf count is designed the answer.

The aerial count was scheduled to begin January 21 and run through February 2, but has been delayed indefinitely due to the partial government shutdown.

“Our first flight was going to be the 21st, that was the plan,” said J. Paul Greer, leader of the Interagency Field Team that manages the wolves for the Arizona Game and Fish Department.

Greer said the the U.S. Fish and Wildlife Service is the lead agency for the aerial count. USFWS is the federal agency in charge of carrying out the Endangered Species Act and working to help animals listed as endangered, such as the Mexican gray wolf, to recover.

The annual count establishes a benchmark by which the success of the recovery of a species can be measured. Last year’s count came up with 114 Mexican gray wolves in their territory in Arizona and New Mexico, only one more wolf than was counted the previous year.

Greer said that the AZGFD wolf program begins an on-the-ground count in November, prior to the annual aerial count.

“Our wolf count actually starts on the first of November “¦ and goes up until the helicopter count period at the end of January, early February,” he explained. “Arizona Game and Fish Department personnel on the wolf program have been conducting on-the-ground wolf count efforts since November, and we continue to do that,” he said.

“We use a number of different methods to obtain the (on-the-ground) count. Our biologists are on the ground getting visual observations of the wolves, the collared animals in the packs, counting the number of wolves in each pack. We are also using the snow to our advantage to identify how many animals were traveling in the packs based on tracks (and) using trail cameras to get photographs of wolves,” he explained. Greer said that they also follow up on sighting of wolves reported by the public.

The helicopter portion of the count also includes the darting and live capture of some wolves to check on the individual health of the animals, and fit them with radio or GPS collars if they do not have one.

“The U.S. Fish and Wildlife Agency is the lead agency in the recovery project. Specifically how they lead the effort is they bring in the emergency response plan, they come up with the capture plan. They contract for the helicopter and cover the financial aspect of the helicopter,” Greer said.

“We have plans to initiate the helicopter count and capture operation once the shutdown ends and the Fish and Wildlife service is back to work,” he said.

Greer said that the AZGFD wolf recovery program has not been significantly impacted by the shutdown beyond the delay of the helicopter count.

“How long it will be delayed is anyone’s guess,” he added.

Greer said that the delay of the count and capture effort is not a significant problem at this point, but his agency will have to look at some kind of alternative if the government is not up and running by mid-February.

“If we hit the middle of February and we are still in this holding pattern, I think we would have to consider all options. Obviously getting a good minimum count that’s within the count period that we’ve done in years’ past, that’s obviously important for recovery efforts. So I think we would consider what options were available, are feasible at that time.”

As of Thursday Congress and the President had not reached an agreement that would re-open the federal government agencies affected by the shutdown.