17
May
Back one page

Beyond being cute, the pups represent the WCC’s active participation in an effort to save a species from extinction.

The WCC is one of more than 50 institutions in the U.S. and Mexico participating in the Mexican Wolf Species Survival Plan — a bi-national initiative whose primary purpose is to support the reestablishment of Mexican wolves in the wild through captive breeding, public education, and research.

Most wolves born in captivity spend their lives there, but unbeknownst to the largest of the litter, the female pup was destined for a wild future.

On May 9, the two-week-old pup was flown to Arizona and successfully placed in the den of the Saffel wild wolf pack, where the breeding female had recently given birth to her own litter.

Cross-fostering is a coordinated event where captive-born pups are introduced into a similar-aged wild litter to be raised by surrogate parents.

According to U.S. Fish and Wildlife Service’s (USFWS)’s Initial Release and Translocation Proposal for 2019, Mexican gray wolves within the wild population are as related to one another as full siblings. This cross-foster recovery technique provides the opportunity to augment the population’s genetics.

Addressing genetic imperilment requires an active program of releasing wolves from the more genetically diverse captive population to mitigate further inbreeding. USFWS’s goal for 2019 is to foster up to 12 pups into the wild in New Mexico and Arizona, with the hope that they will eventually spread their genes to the greater population. 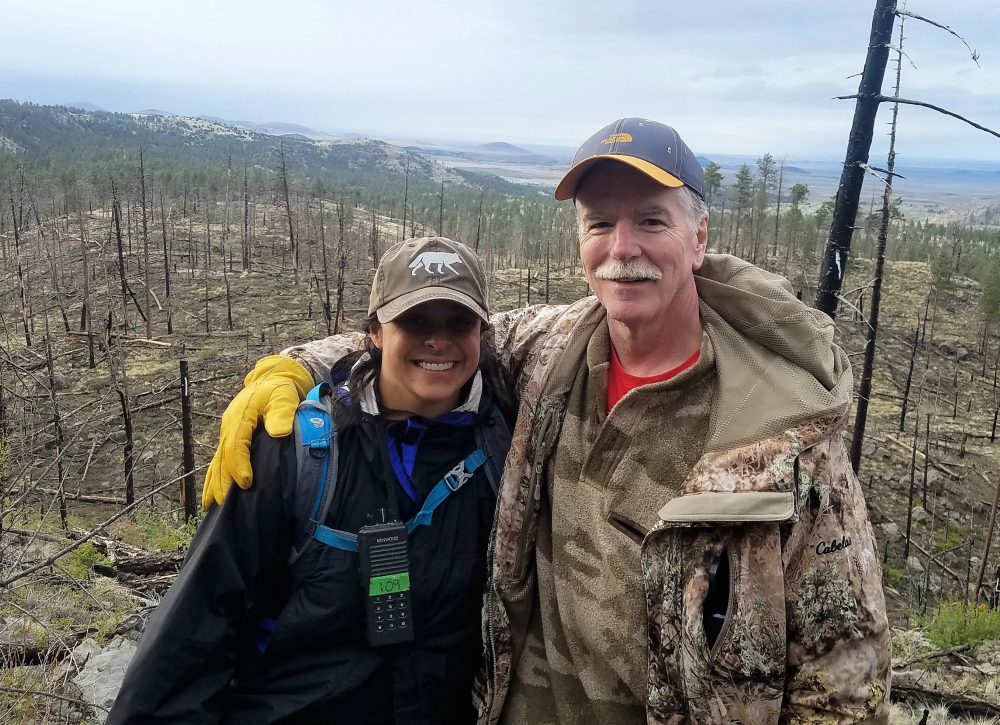 The WCC has been a critical partner in the Mexican Gray Wolf Recovery Program for nearly two decades. To date, three adult Mexican gray wolves from the center have been released in the wild. Participating in a cross-foster, however, is a historic first for the center.

“Trumpet’s pup is part of the critical effort to save her imperiled species,” said Maggie Howell, Executive Director of the WCC. “At just two pounds, she’s a North American superhero! She’s become a living, breathing part of the southwestern landscape, and her story will help raise awareness for Mexican gray wolves and the active efforts to save them.”

“The WCC is thrilled to be a part of this important recovery mission,” stated WCC Curator Rebecca Bose. “The collaboration among all who had a hand in delivering Trumpet’s pup to her wild family is a true testament to the dedication of everyone involved. In addition to USFWS, the Arizona Game and Fish Department and WCC veterinarian Paul Maus, DVM were key. We are especially appreciative of a generous friend of the center for providing his plane to transport the precious passenger from New York to Arizona!”

Trumpet and her pups are not on public exhibit, but sixteen live webcams, available on the WCC website, invite an unlimited number of viewers to enter the private lives of these elusive creatures.

The Mexican gray wolf (Canis lupus baileyi) or “lobo” is the most genetically distinct lineage of wolves in the Western Hemisphere, and one of the most endangered mammals in North America. By the mid-1980s, hunting, trapping, and poisoning caused the extinction of lobos in the wild, with only seven remaining rescued from extinction in captivity. In 1998, the wolves were reintroduced into the wild as part of a federal reintroduction program under the Endangered Species Act. Today in the U.S., there is a single wild population comprising only 131 individuals — an increase from 114 counted at the end of 2017.

About The Wolf Conservation Center

The Wolf Conservation Center, a 501(c)(3) not-for-profit environmental education organization located in South Salem, NY, has been working for nearly two decades to protect and preserve wolves in North America through science-based education, advocacy, and participation in two federal recovery and release programs. Through wolves, the WCC teaches the broader message of conservation, ecological balance, and personal responsibility for improved human stewardship of our World.

To learn more about the WCC’s inspiring education programs, including its popular nocturnal adventure experience “Sleeping with Wolves”, please visit the WCC website at www.nywolf.org.

For those eager to get a peek at the pups and the other 50+ wolves who call the WCC home, please visit the WCC webcams at https://nywolf.org/webcams