17
Dec
Back one page 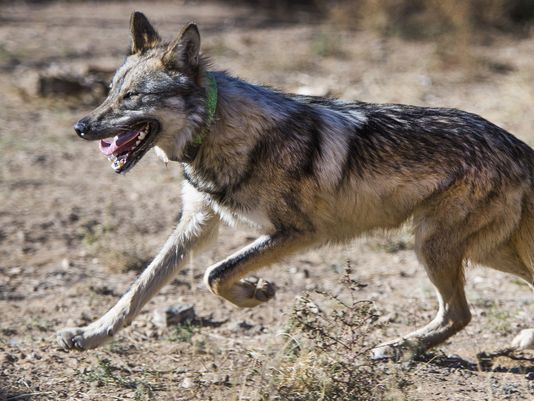 The U.S. Forest Service has moved to revoke a New Mexico rancher’s grazing permit after he admitted trapping an endangered Mexican gray wolf and hitting it with a shovel.

The wolf later died, according to a spokeswoman for the U.S. Fish and Wildlife Service.

The permit has allowed Craig Thiessen to graze hundreds of cattle across nearly 50,000 acres of the Gila National Forest in New Mexico.

He must remove his cattle or appeal the Forest Service’s decision within 45 days from November 29, said Marta Call, a spokeswoman for the Gila National Forest.

Thiessen said he will appeal, which will set in motion a process that Call said could take around six months.

He stopped short of admitting to killing the wolf in his plea agreement. He told The Arizona Republic the wolf ran away after he let it go.

But the wolf succumbed to the injuries it sustained from Thiessen, according to the Fish and Wildlife Service spokeswoman.

Thiessen’s confession was enough to convict him in court. Mexican gray wolves are protected by the Endangered Species Act. And grazing permit terms require ranchers to comply with federal laws protecting wildlife and other aspects of the environment.

This is the first time the Forest Service has moved to revoke a rancher’s grazing permit for harming a Mexican gray wolf, Call said.

It alarmed members of the New Mexico Cattle Growers Association, many of whom share the land with wolves. Environmental groups conversely applauded the Forest Service’s decision to revoke the grazing permit, calling it an important precedent for the agency to set. 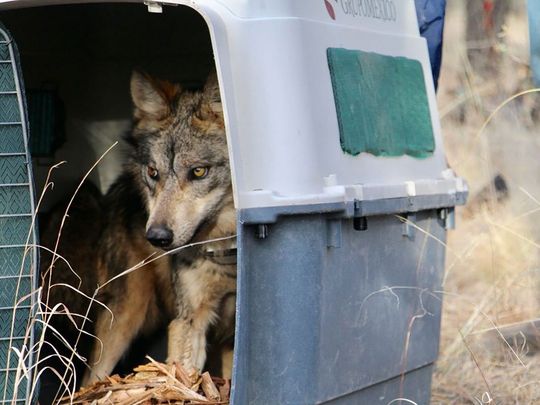 It is a “pivotal moment,” said Bryan Bird, the Southwest program director for Defenders of Wildlife, an organization that encourages ranchers to take steps to coexist with Mexican gray wolves.

By moving to revoke the grazing permit the federal agencies are showing that they are willing to do what’s needed to ensure Mexican gray wolves are recovered off the endangered species list, he said.

“They are willing to take a stake and put some skin in the game.”

The executive director of the New Mexico Cattle Growers Association said the Forest Service went too far. A judge already sentenced him in May to a year of probation and forced him to pay $2,300 in restitution.

“He pled to a misdemeanor, not a felony,” said Caren Cowan, the association’s executive director. “And now they’re going to take his life away from him? For a misdemeanor.”

After Thiessen was convicted, a coalition of organizations and individuals petitioned the Forest Service to revoke his grazing permit, arguing that his punishment wasn’t enough to deter others from killing wolves.

If Thiessen loses the permit, he’ll have to sell off his cattle, he said.

All he’d have left is his 40 acres that adjoin the Gila forest, but that’s not even enough land for one cow, he said.

Without his ranching income, he’d have to move away. He bought the ranch with his life’s savings and if he loses the permit, he’ll lose everything he invested into it, he said.

“I certainly think this is going to hit the rancher’s bottom line,” Bird said.

Like Thiessen, many ranchers in wolf country depend on public lands to graze their livestock, he said.

“If these ranchers are not willing to take the steps necessary to conduct their business while living in peace with Mexican gray wolves,” Bird said, “this is the price they have to pay.” 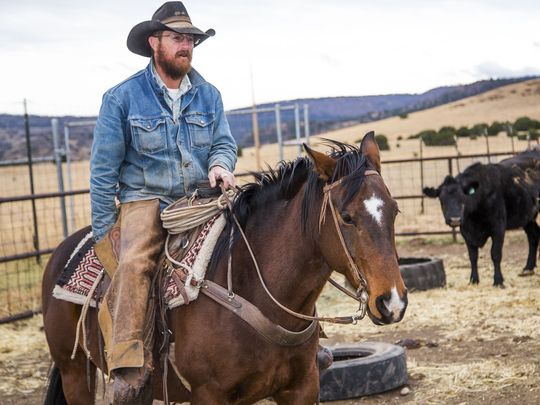 Todd Swinney is a range rider, a person who tries to protect grazing cattle herds from wolf attacks by scaring off the wolves with noise and other techniques. He talks about his job while sitting atop his horse, Cal, at a ranch near Springerville, Tuesday, November 7, 2017. (Photo: Tom Tingle/The Republic)

Death by human is a top threat to Mexican gray wolves, according to the species’ most recent federal recovery plan.

Officials documented five dead wolves in November, but are still investigating how they died.

As of Nov. 30, authorities had found a record 17 dead wolves in 2018. It’s the highest number recorded since reintroducing the wolves back into the wild in 1998.

A spokeswoman for the Fish and Wildlife Service said in a statement that this year’s increased count is likely due to “improved mortality detection.”

Predator eradication campaigns to protect livestock largely contributed to the Mexican gray wolf’s downfall decades ago. The species’ original recovery plan in 1982 described the campaigns as “crusades” fueled in part by “fear and loathing.”

By the mid-1900s, Mexican gray wolves were nearly extinct. Today, the entire population in the recovery program has originated from seven wolves.

The population will remain on the endangered species list until an average of 320 roam the U.S. and 200 roam Mexico over eight years, among other criteria.

A least 114 Mexican gray wolves roamed the U.S. during the last annual count. And the Mexican government reported more than 30 in a September report.

Can ranchers and wolves coexist? 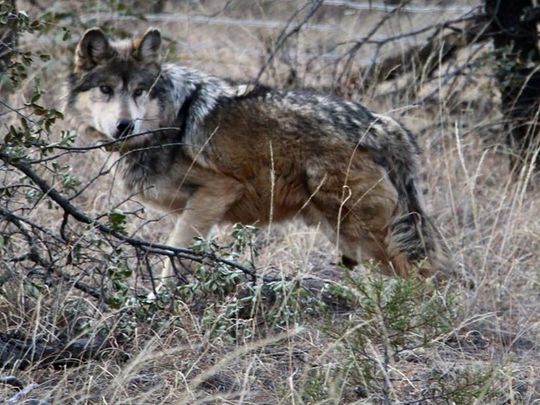 Despite what it may mean for Thiessen’s livelihood, revoking his grazing permit was warranted, she said, adding that ranchers who use public lands need to share it with plants and wildlife.

“This individual crossed some pretty big lines,” she said. “He needs to uphold the law and he wasn’t.”

Most of the ranchers on public lands act in good faith, said Bird, the wolf advocate at Defenders of Wildlife who promotes coexistence between ranchers and wolves.

From year to year, Defenders of Wildlife works with around 15 to 20 ranchers to help them learn to live with Mexican gray wolves, he said. Bird hopes the idea of coexistence and the tools that the organization promotes will spread throughout the ranching community.

But Thiessen said the coexistence model isn’t fair, that ranchers get hit the hardest.

“They’re not coexisting,” Thiessen said. “They’re trying to tell us to get along with them, but then run roughshod over us.”

‘Looking over your shoulder’ 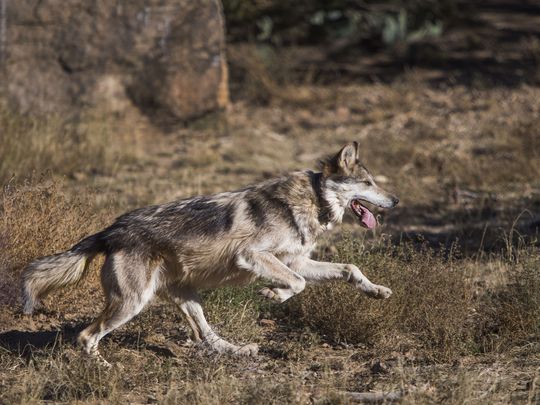 A male Mexican gray wolf tries to elude capture inside an enclosure at Sevilleta National Wildlife Refuge in New Mexico, Nov. 8, 2017. The wolf was to be transported to the Endangered Wolf Center in Eureka, Missouri, for breeding purposes. (Photo: Tom Tingle/The Republic)

Wolves have killed or injured livestock 31 times in Arizona and 66 times in New Mexico this year through November, according to the Mexican Wolf Reintroduction Project.

Depending on the animal, many of those lostare worth hundreds of dollars at auction. A 500- to 600-pound heifer, for example, fetches up to $840, according to a recent market report by Roswell Livestock Auction Sales, Inc., in New Mexico.

And other cows are worth much more, Thiessen said, especially those that produce calves year after year.

Programs to reimburse ranchers for wolf attacks on cattle don’t fully compensate them for their losses, Cowan said.

Thiessen said he has been reimbursed for only a fraction of what wolf attacks have taken from him.

Despite reassurances from federal agencies that ranchers are allowed to kill Mexican gray wolves to protect their cattle during a wolf attack, many ranchers fear they’ll be punished, Cowan said. Losing a grazing permit is among their most dreaded outcomes.

“This is the threat that has been hanging over their head,” Cowan said. “Any time that a federal agency can take your livelihood away from you, you better start looking over your shoulder.”

~~~~~~~
Show your support for Mexican wolves with a Letter to the Editor today!
The letters to the editor page is one of the most widely read, influential parts of the newspaper. One letter from you can reach thousands of people and will also likely be read by decision-makers.  Tips for writing your letter are below, but please write in your own words, from your own experience.  Don’t try to include all the talking points in your letter.
Letter Writing Tips & Talking Points
Make sure you:
“¢ Thank the paper for publishing the article
“¢ Submit your letter as soon as possible. The chance of your letter being published declines after a day or two since the article was published
“¢ Do not repeat any negative messages from the article, such as “so and so said that wolves kill too many cows, but”¦”  Remember that those reading your letter will not be looking at the article it responds to, so this is an opportunity to get out positive messages about wolf recovery rather than to argue with the original article
“¢ Keep your letter brief, under 200 words
“¢ Include something about who you are and why you care: E.g. “I am a mother, outdoors person, teacher, business owner, scientific, religious, etc.”
“¢ Provide your name, address, phone number, and address.  The paper won’t publish these, but they want to know you are who you say you are.
Submit your letter to the editor of the Arizona Republic
Back one page
Share Post: