20
Dec
Back one page

FARMINGTON — Three wolf pups scamper outside the den, clumsily running after their parent. The first wild-born pups from wild-born Mexican gray wolves were seen playing and, to all appearances, thriving. The 2002 video footage from Arizona Game and Fish marked a milestone in Arizona and New Mexico’s efforts to recover the Mexican wolf, a subspecies of the gray wolf, from the brink of extinction.

But the success of the Mexican wolf recovery could be linked to that of the gray wolf throughout the western United States, according to supporters of the animal’s reintroduction. And for the past few decades, Colorado has been seen as the missing link in establishing a habitat range connecting wolf populations to Mexico and Canada.

A new initiative, which needs 124,000 signatures to be added to the 2020 ballot, could see Colorado join Montana, Wyoming, Idaho, Arizona, New Mexico and some Great Lakes states in recovery efforts of the gray wolf. A group turned in about 208,000 signatures that have not yet been verified. Colorado’s Initiative 107 would direct the Colorado Parks and Wildlife Commission to restore and manage gray wolves in the state by the end of 2023.

The expansion of the gray wolf’s habitat into Colorado could help the genetic diversity — and long-term success — of the Mexican gray wolf in southern Arizona and New Mexico, said Michael Robinson, senior conservation advocate with the Center for Biological Diversity. “We need to have the Mexican wolf population connected to other wolf populations,” Robinson said.

Yet there has been push-back against the animal’s reintroduction in both New Mexico and Colorado from landowners and ranchers who fear the animal could harm their livestock and ultimately prove costly.

J. Paul Brown, an Ignacio sheep rancher, said people who support the wolf’s reintroduction to Colorado don’t understand the potential impact the animals could have on livestock, wildlife and the state’s ecosystem. “The pro-wolf people will say we need this to balance the ecosystem,” Brown said. “In Colorado, we have a balanced environment already. We use hunters to keep the population of game down, which is also good for the economy.” Brown also pointed to reports of wolves that have already migrated into the state.

“I believe if we’re going to have wolves in Colorado, let them migrate in and then they can try to establish themselves,” he said. 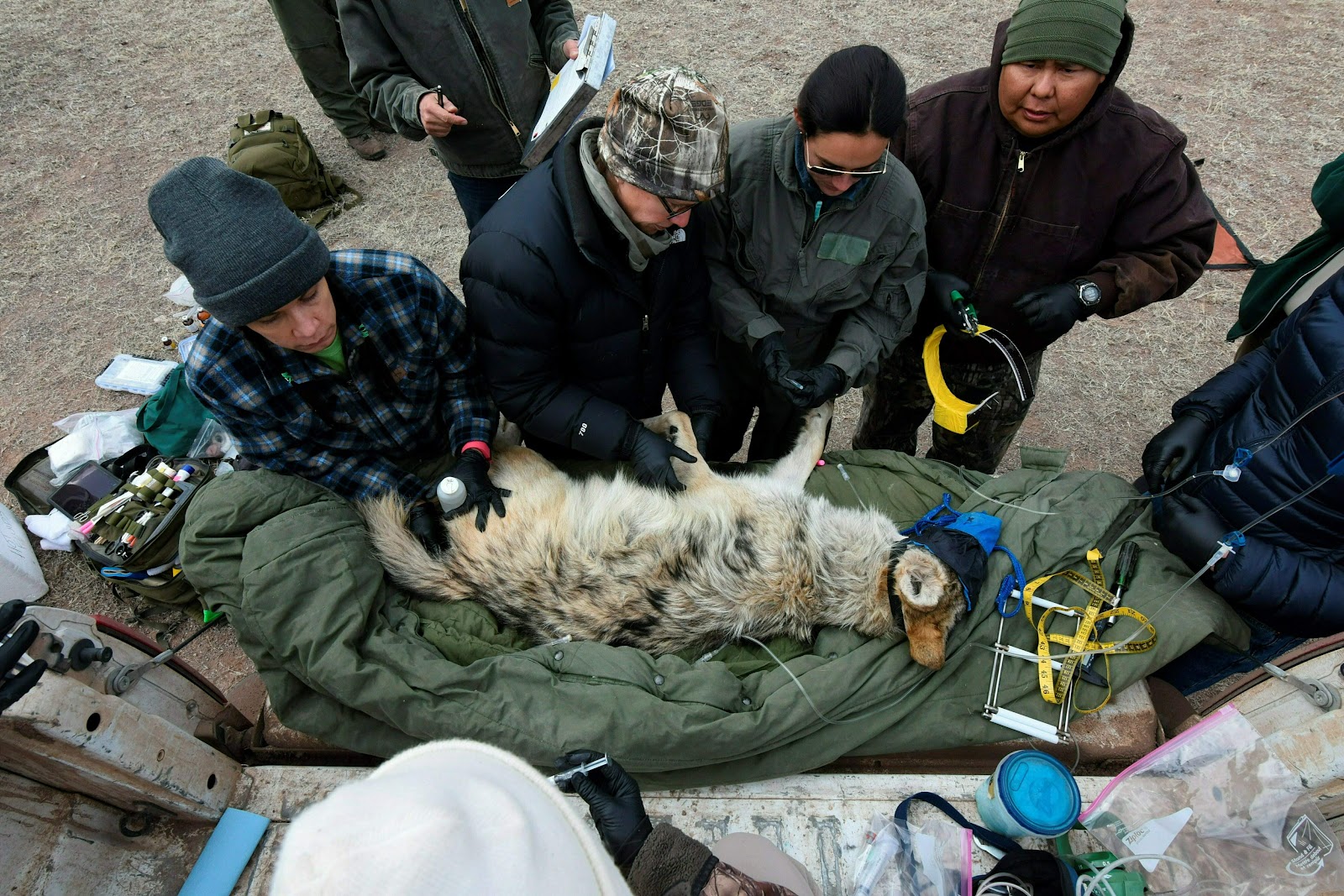 Members of the Mexican gray wolf recovery team gathered data from a wolf captured in Arizona during the annual census in February. Groups like Stop the Wolf Coalition in Colorado worry the animal’s reintroduction could harm livestock and cattle.

By the mid-1900s, wolves were becoming a rare sight in the American West as the animal was seen as a danger to livestock and cattle. After the federal Endangered Species Act protecting gray wolves was established in 1983 and over three decades of concerted efforts by recovery advocates and federal and state governments, the gray wolf population is estimated to be roughly 5,500 throughout the United States, according to the U.S. Fish and Wildlife Service.

“A lot of people understand that wolves are very ecologically important and play a key role in keeping the balance of nature,” Robinson said.

The Mexican gray wolf, smaller and with distinct differences from the gray wolf, has historically ranged from southern New Mexico, southeastern Arizona and into Mexico. It is one of the rarest subspecies of the gray wolf in North America, said Steward Liley, wildlife management chief with the New Mexico Department of Game and Fish. Arizona and New Mexico are home to about 131 of the wolves, according to the U.S. Fish and Wildlife’s 2018 count. While 90% of the wolf’s historic habitat was in Mexico, the U.S. has a Mexican gray wolf recovery goal of 320 animals, Liley said.

While work to reintroduce the Mexican gray wolf started in 1998, efforts were discontinued in 2011 when former New Mexico Gov. Susana Martinez’s game commission stopped cooperating with federal agencies. In November, the New Mexico Department of Game and Fish and New Mexico State Game Commission signed a memorandum of understanding with the U.S. Fish and Wildlife Service to rejoin direct recovery efforts. 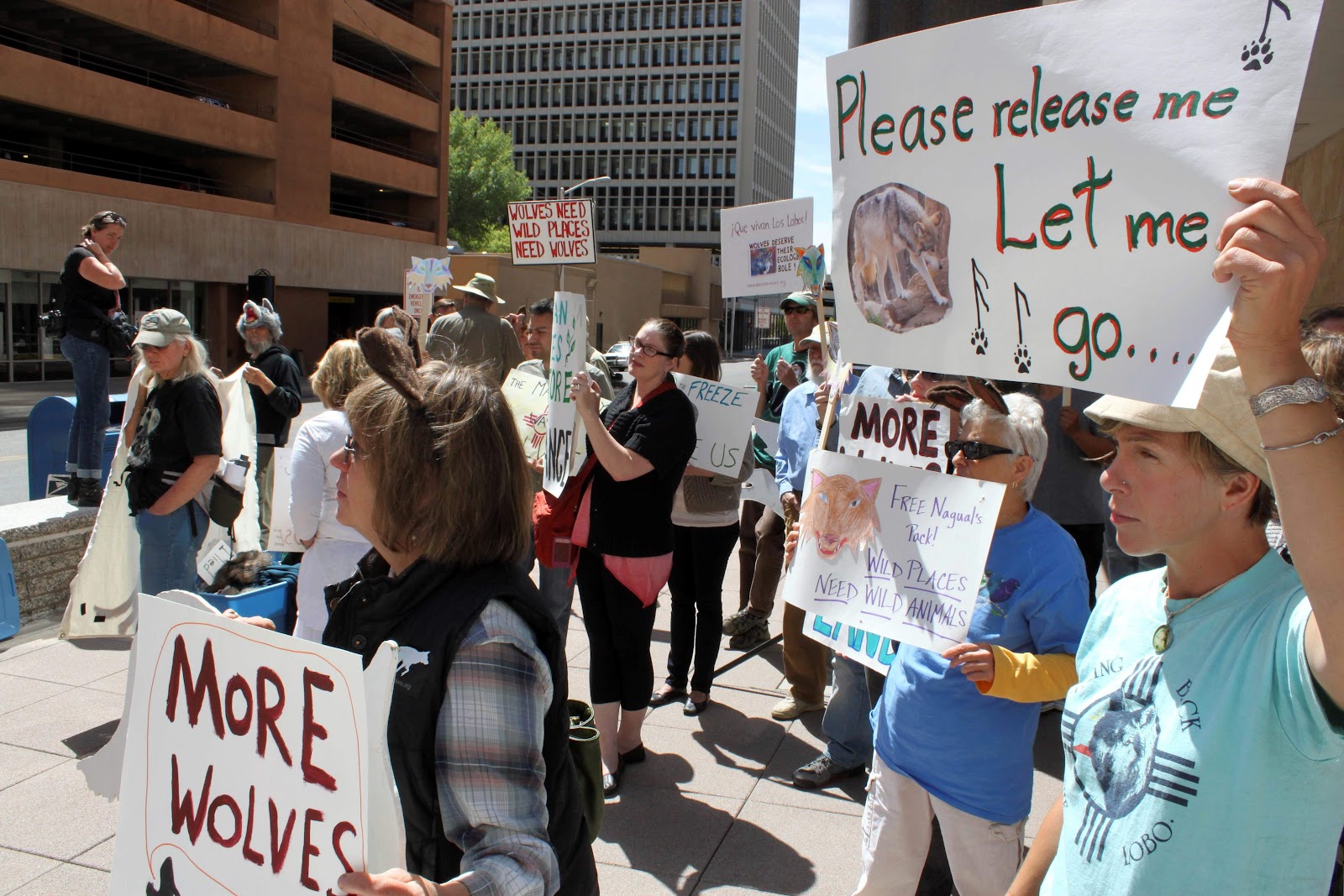 In 2012, activists urged the U.S. Fish and Wildlife Service to release more captive Mexican gray wolves into the wild, shortly after then-governor Susana Martinez’s government stopped cooperating with federal agencies in 2011 on the animal’s recovery.

“It’s a significant step in terms of messaging coming from the state, that they are interested in aiding the Mexican wolves,” said Chris Smith, Southern Rockies wildlife advocate with Wild Earth Guardians. “I think the actual outcome is yet to be determined.” Wild Earth Guardians, like the Center for Biological Diversity, has been involved in regional efforts to reintroduce and protect gray wolf populations.

The efforts in New Mexico and Arizona haven’t been without setbacks though. One of the long-term challenges facing the Mexican gray wolf’s successful recovery is inbreeding and a lack of genetic diversity, Robinson said. Wolves in the northern Rocky Mountain states have a larger connection to packs in Canada and therefore a greater genetic pool. But the Mexican gray wolf is cut off from gray wolves in the northern ranges because Colorado remains empty of wolf packs, Robinson said. While federal and state agencies have used cross-fostering — placing pups born in captivity with packs in the wild — Robinson said at best it’s a short-term solution. 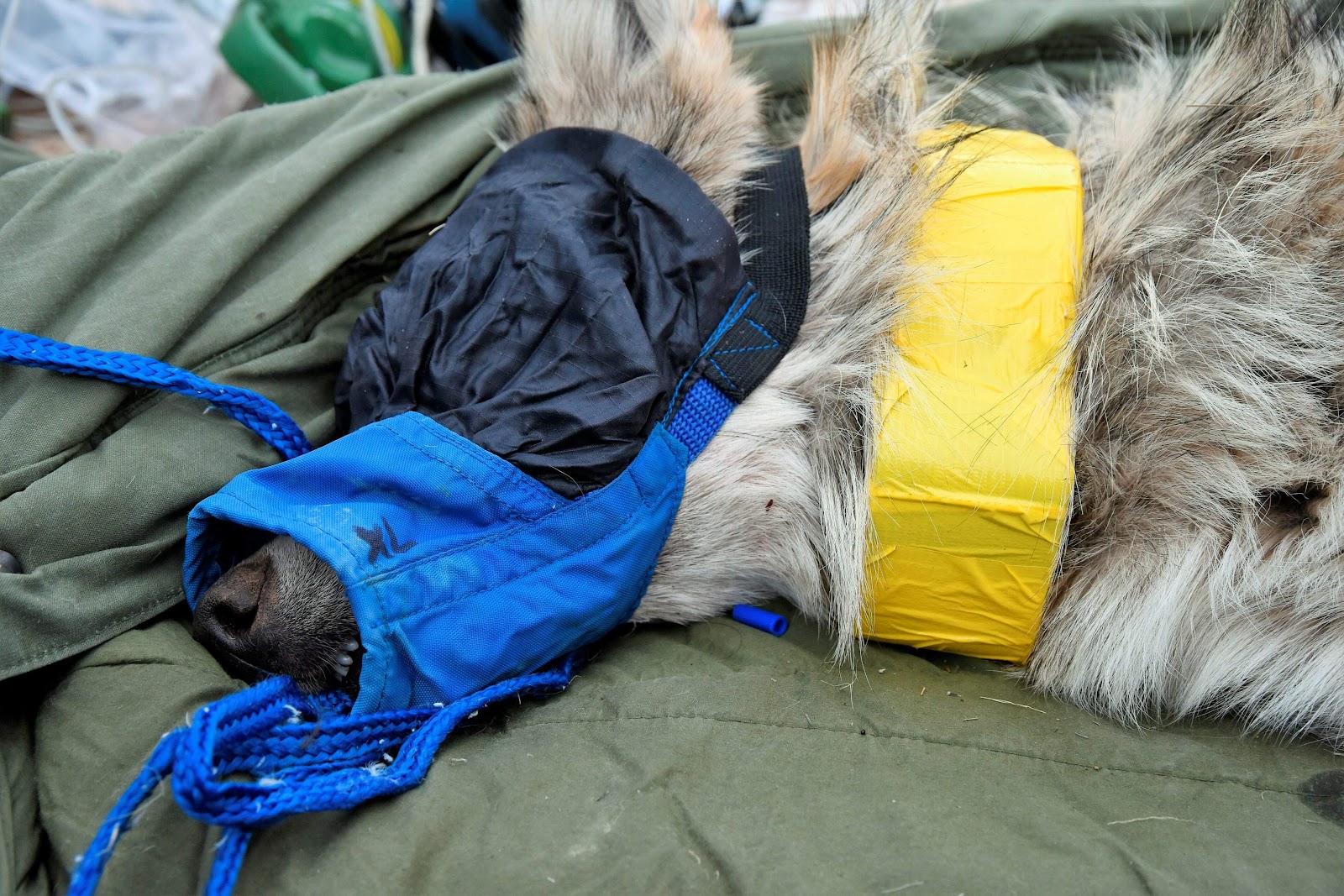 But if Colorado’s 2020 ballot measure is successful and the gray wolf’s range is extended to Colorado, the Mexican gray wolf would have a greater chance of diversifying its gene pool and ensuring its long-term success, Robinson said.

Smith also said it’s difficult for wolf recovery efforts to work in isolation because “wolves don’t recognize political boundaries.” He added, “If that’s what full recovery looks like, we need to see Colorado do their part in helping recovery efforts.”

But critics of the wolf’s reintroduction aren’t so certain. Chad Vorthmann, executive vice president of the Colorado Farm Bureau, said his organization was against the ballot initiative because state biologists do a better job of managing the ecosystem than can be done at the ballot box. Introducing gray wolves from Canada would have a negative impact on wildlife, livestock and rural communities on the Western Slope, he said.

Vorthmann also mentioned the reports of wolves from Wyoming and New Mexico traveling into Colorado but said it’s more acceptable if the wolves migrate from other areas, because “we can see nature play out” in that scenario.

Both supporters and critics seem to agree, though, the wolf’s recovery is at a pivotal moment — Colorado voters are set to determine if gray wolves will be seen roaming throughout all of the Rocky Mountain range states again.

“Not everyone is going to agree, but overall, the benefits of having an animal that was part of the landscape for many thousands of years returned is really apparent to people,” Robinson said.